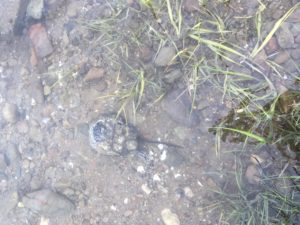 Sign up here for news and information regarding horseshoe crabs in Massachusetts.

Goal: To monitor the abundance of spawning horseshoe crabs on Plymouth’s Long Beach and report the data to the Atlantic States Marine Fisheries Commission (ASMFC) to allow that organization to properly track and manage horseshoe crab populations.

What would I do?  You’ll be trained to conduct surveys during new and full moons between late March and June on Plymouth’s Long Beach: basically you wade in the water and count the horseshoe crabs you see. Note that some surveys must be conducted late at night.

Why is it important?  The Atlantic Horseshoe Crab, Limulus polyphemus, is a remarkable species in its own right and a critical food source for migrating seabirds including the red knot. Horseshoe crabs have been around for over 350 million years. In the last several decades however development of the shoreline, the use of its ancient blood for medical research and vaccines, and overfishing has put its populations at risk.  They are now designated as “vulnerable to extinction” by the IUCN. It is important that scientists and policymakers have a better understanding of horseshoe crab populations so that they can be more effectively monitored and protected.

Who can I contact to get involved?  Fill out this form or email slheller@comcast.net for more information!